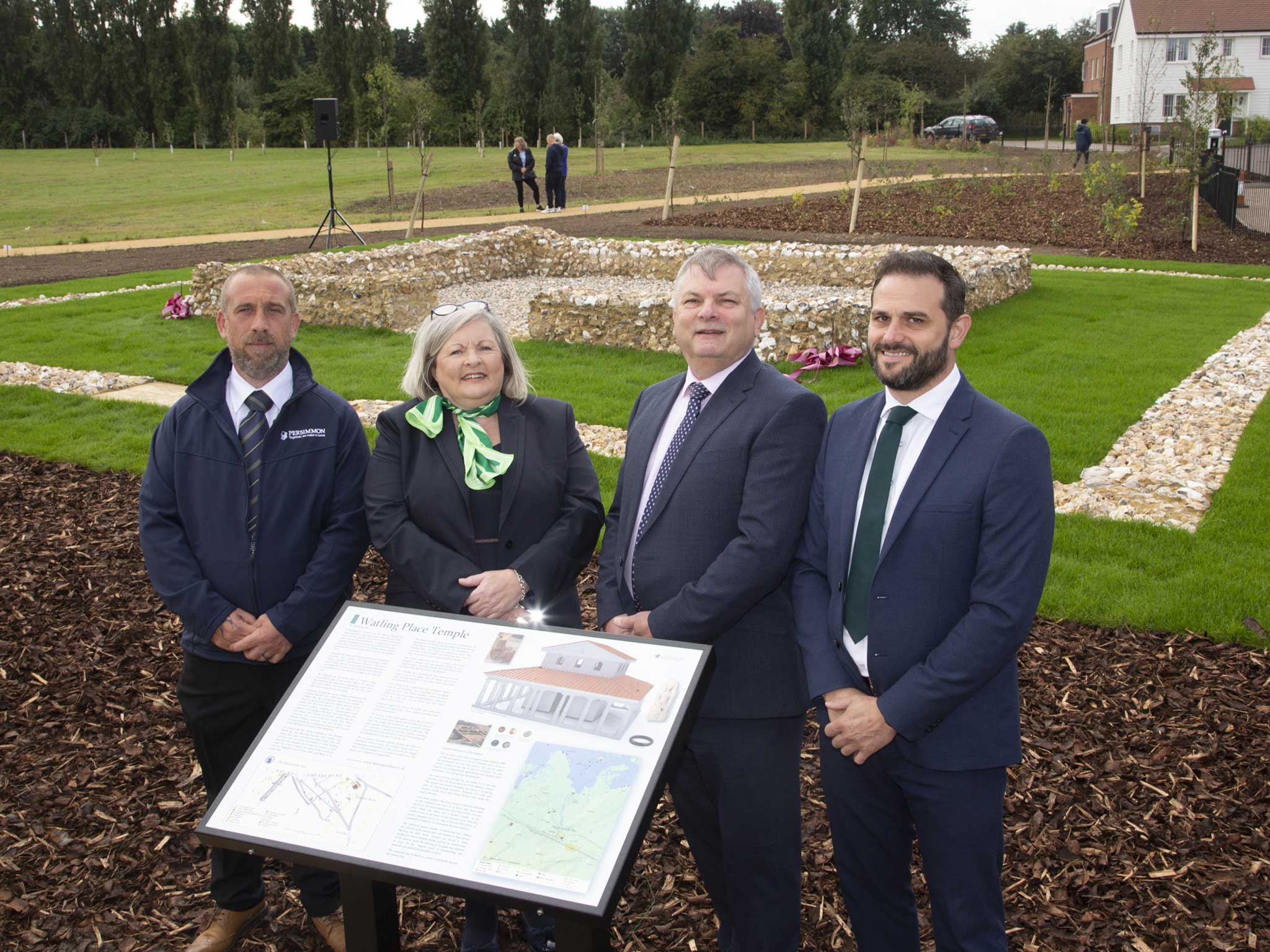 The foundations of a Roman temple uncovered during the construction of our Watling Place development in Sittingbourne, Kent, have been unveiled to the public.

The temple base was part of a late-Iron Age and Roman industrial settlement uncovered in an exceptional state of preservation by archaeologists at the site alongside the A2 in Newington village.

A team of 30 archaeologists spent more than a year working on the excavated Roman small town, describing it as ‘one of the most significant sites’ in Kent and of national importance.

In welcoming everyone, Sue Flipping of Newington History Group said: “We’re here today because two organisations chose to help us do something both extraordinary and visionary for Newington’s heritage.

“In March 2019, Thelma Dudley, one of the founders of Newington History Group, was invited to visit the excavation at Watling Place. From that meeting, Persimmon Homes generously gave the Group permission to follow the archaeology, and Richard Thompstone and I were able to give updates on one fascinating find after another to our local community.

“We thank Persimmon Homes and hope that other developers will follow your enlightened approach.”

Persimmon worked closely with the local history group and archaeologists to collect and store the original stones from the monument. Persimmon delayed construction on the site, financed archaeological excavations, lifted and relayed the stones, and erected an information board at the temple as part of a public display.

Sue added: “We’re so pleased to have been part of a project that demonstrates what can be achieved when organisations think beyond the norm – when a housing developer encourages interest in an archaeological excavation, when an archaeological team re-builds as well as uncovers, when a history group looks forward to the future as well as back to the past.”

More than 100 visitors watched as 12-year-old local resident Ellie Wolfe cut the ribbon to officially unveil the attraction. Ellie lives in one of the Persimmon houses overlooking the site and helped lay some of the stones during the reconstruction.

South East managing director Martin Crick said: “It has been a privilege for us to be able to give something back to the local community, and to know that Watling Place now has its own important place in history.”

Dr Paul Wilkinson, archaeological director at SWAT Archaeology, said: “Watling Place Temple is at one of the most important discoveries of a Roman small town in Kent for many years. The preservation of the Roman buildings and artefacts are exceptional.”