Lord Mayor of Cardiff bowled over by donation 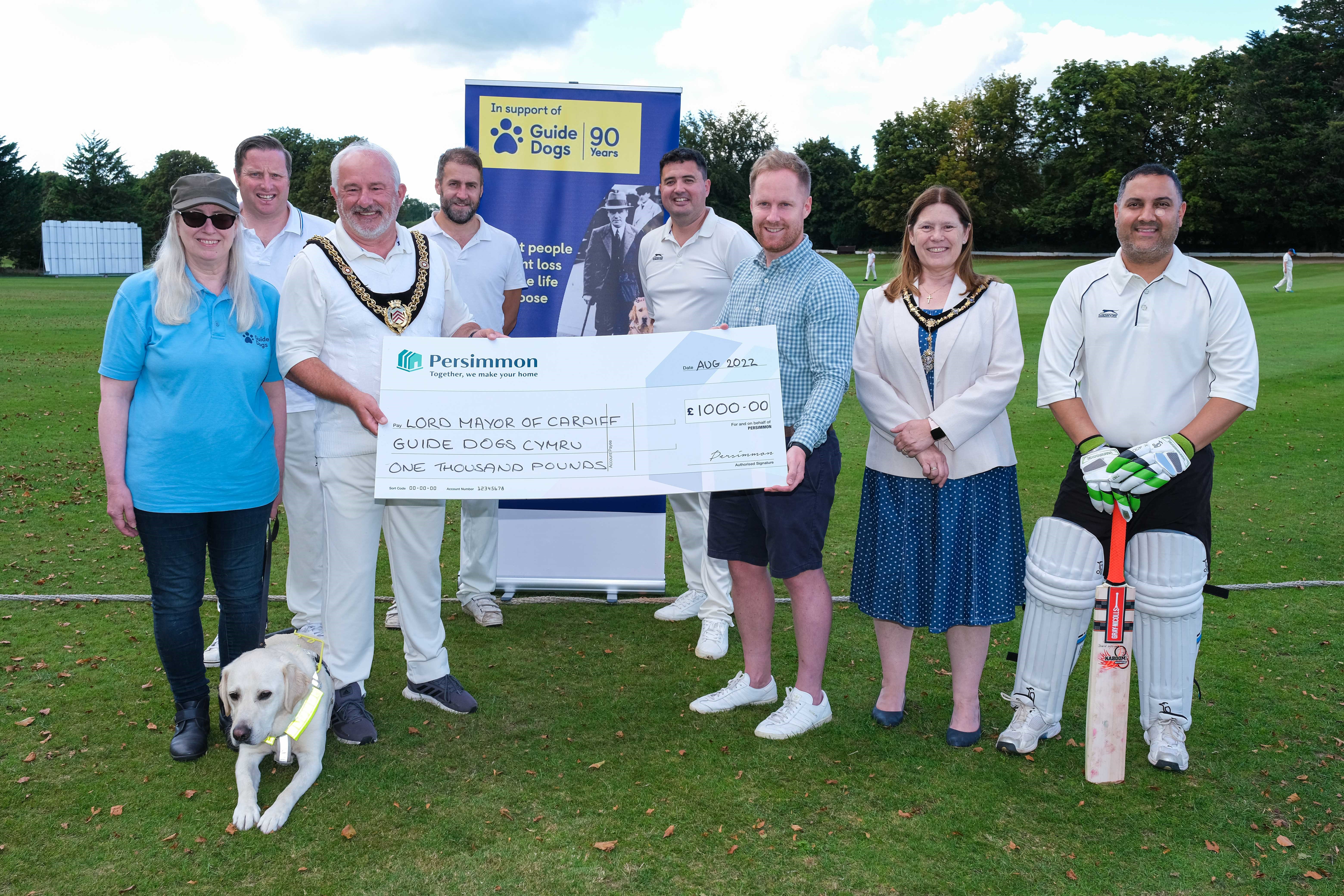 The Lord Mayor of Cardiff’s fundraising efforts for Guide Dogs Cymru have been boosted by a donation from a Welsh housebuilder.

East Wales recently supported the charity by sponsoring the annual Lord Mayor’s charity cricket match with a donation of £1,000 through its Community Champions initiative.

This year’s Lord Mayor of Cardiff is Cllr Graham Hinchey, who is using his year in office to raise as much money as possible for Guide Dogs Cymru, having fostered over 25 guide dogs during the past decade.

The charity match is held every year at St Fagans Cricket Club to raise funds for the Lord Mayor of Cardiff’s chosen cause and sees local councillors take on officers in a friendly T20 match. Cardiff’s Councillors, led by Cllr Peter Bradbury, emerged victorious in last Friday’s fixture.

“I’m extremely grateful to the team at Persimmon Homes East Wales for their generous support.

“As someone who was born in Cardiff and lived in Cardiff all my life, I’m honoured to be Lord Mayor, and it provides me with an opportunity to support a charity which is very close to my heart.

“Having fostered over 25 guide dogs during the last decade, I know at first-hand how vital they are to helping people with sight loss regain their confidence and play an active part in society.

“Someone loses their eyesight every six minutes in the UK, and it can cost up to £55,000 to train a guide dog, so Persimmon’s donation is warmly received and will help us make a difference as we aim to raise as much money as possible for this great charity.

“The Lord Mayor’s annual charity match at St Fagans Cricket Club was once again a fantastic success and I would like to thank the club and everybody who played their part and helped on the day.”

“We’re delighted to be able to support the Lord Mayor of Cardiff and his chosen charity, Guide Dogs Cymru.

“One person with sight loss can have as many as eight dogs over the course of their life with virtually all of the costs covered by charitable donations.

“There’s always a waiting list and often it is young people and teenagers who are most in need with 26,000 people under the age of 18 across the UK with sight loss at the moment.

“As a local business with a number of developments in Cardiff we are proud to have been able to support this incredible charity and the City’s Lord Mayor in his valiant fundraising efforts.”

New Deposit Unlock website launches
The Home Builders Federation (HBF) has launched a dedicated website for its affordable homeownership scheme, Deposit...
We help to open doors for women into site management
Women interested in a career in site management visited our Holly Fields development in Erdington this week to experi...
£5,000 donation from Anglia team helps to restore Carlton Marshes viewing platform
A new lease of life has been given to the viewing area at Carlton Marshes Nature Reserve thanks to a £5,000 donation...
Read all news