A director at Persimmon Homes has drawn on his reserves to battle hail and rain to complete a virtual Channel crossing on his rowing machine in his front garden in aid of charity.

Zac Hurst, commercial director of Persimmon Homes South Midlands undertook the challenge in memory of his 27-year-old cousin Jack Snow, who passed away last year from a brain tumour which was diagnosed when he was just 17.

So far Zac’s challenge has raised more than £15,000 in Jack’s name for the Brain Tumour Charity.

Zac said: “Throughout his battle he never shied away from a challenge and Jack never stopped smiling no matter how much adversity he faced! He was the source of constant sarcastic comments and witty banter, he loved horse racing and football.

“To be honest I decided on this challenge because I need to burn some calories, and I have been training on the rowing machine. Jack was an avid Milwall fan so I set myself the challenge of rowing this epic 21 miles, or in other terms 33,797 metres, wearing a Milwall kit with Jack’s name on the back.

“I think I picked the worst weekend for it, with hail and rain pelting me, but setting up on our front garden on what is quite a busy road in Birmingham helped me take my mind off the physical lows of the challenge.

“People passing by were supportive and some drivers even turned around at the end of the road to come by again! I was surprised to discover I have covered the distance in just under two hours and 50 minutes.”

Zac added: “I have to admit I am overwhelmed with the support everyone has shown, so far we have managed to raise a huge £15,406 and I can’t thank everyone who has donated in Jack’s memory enough.

“Jack worked as an assistant buyer in Persimmon Homes North Midlands, so the support I have received from all our colleagues has been fantastic.” 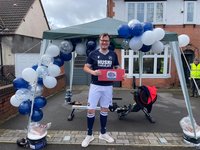 Millbeck Grange wins industry award
Persimmon Homes’ Millbeck Grange in County Durham has been named among a shortlist of sites in England and Wales to w...
Boost for community facilities
Two groups working to enhance the lives of local people have been awarded £1,000 each by Persimmon Suffolk.
Staff in the pink for charity
Employees at the Persimmon Anglia head office on Broadland Business Park, Norwich, raised almost £500 in a ‘Wear It P...
Read all news